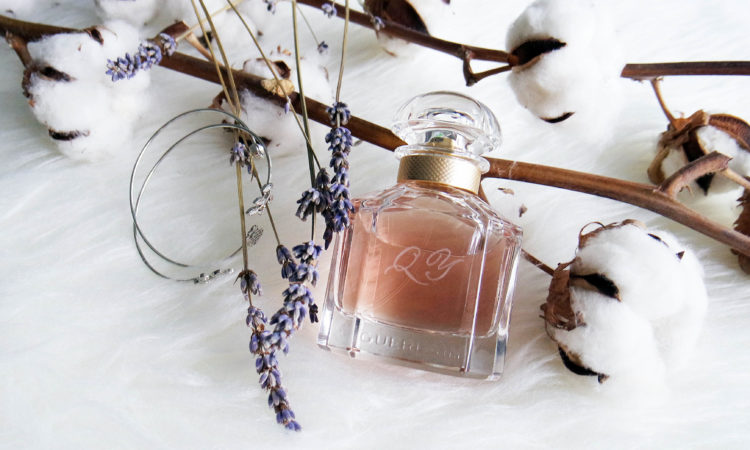 House of Guerlain has a new fragrance which was presented to the world earlier in March. Mon Guerlain, along with its new muse Angelina Jolie, has taken the world by storm.  The fragrance was created by Thierry Wasser, the Master Perfumer of Guerlain. Theirry Wasser is the fifth generation of perfumers and has embodied Guerlain’s long standing history with his heart and soul. An artist and an explorer, he is always in search of new and rare raw materials. Just like his predecessors, he is driven by the love and passion for fragrance creation – a fine craftsmanship at its best. Mon Guerlain pays homage to “an extraordinary, sincere and authentic woman”. She is a woman whose emotions and dreams embody modern femininity…

“The creation of a fragrance is a work of emotion and intuition. It perpetuates the wonder offered by the beauty of nature when enhanced by human intelligence.”
– Jacques Guerlain

A felicitous quote which describes the dazzling fragrance and the iconic bottle. The rectangular flacon is seems typical of an alchemist bottle, however, it is the unique design of the stopper which stands outs. The “quadrilobe” bottle is a portmanteau of the words quadruple and lobes. Needless to say, the stopper looks like a four-lobed shape transparent glass. A light pink shade fills the alchemist bottle and the quadrilobe glass stopper seals it. The gentles curves which form solid lines would seem like a paradox. Yet, it is the contrast which symbolises the essence of contemporary femininity – sensual, strong and free. The overall design is sophisticated and luxurious; of course, a touch of gold wouldn’t hurt too. Now let’s explore the intriguing composition Mon Guerlain brings. The stars include carla lavender grown high up in the Provencal Drome region and fresh bergamot as the top notes. One might think, these notes would make a rather masculine scent. Oh but no, lovely iris and jasmine sambac hailed from northern India joins in at the heart of the fragrance. Tahitensis vanilla picked in Papua New Guinea blends seamlessly with sandalwood grown and selected from Australia. The final composition is very feminine and elegant. No wonder Mon Guerlain was endearingly proclaimed to contain “notes of a woman”.

We always create for a woman we admire. – Jacques Guerlain

This woman is none other then the new face of Guerlain – Angelina Jolie. Interestingly, the fragrance was launched at a perfect time – the month in which we celebrate International Women’s week. Angelina Jolie is the epitome of an intelligent and independent, yet a compassionate and generous woman. She has always been a little different, not one who’d fit into a definitive category. It is little wonder why Guerlain chose her as their new icon.

The people at Guerlain met Jolie in Cambodia while she was shooting her fourth film, First They Killed My Father. Thereafter, they began their partnership. However, the admiration is not one sided as Jolie grew up with memories of Guerlain. She recalls the powder her beloved mother used, which smelled like violets and iris. From then, Jolie associated the brand with elegance and class.

The search for fragrance follows no path other than obsession.

Angelina Jolie looking ethereal in this breathtaking video shot in France last September. I love how the film shows snippets of the perfumery process and how they chose the raw materials grown in the wild.

Mon Guerlain seems to me like a powdery gourmand eau de parfum. The citrus and lavender notes are perceptible in the initial stage. At the same time, the  powdery note is apparent but turns even more so after a few minutes. A few moments shortly after, the vanilla note becomes increasingly more pronounced as time passes by. The powdery note, alongside a more faint woody note, also accompanies the vanilla note. Longevity of the fragrance is moderate, though I did expect it to last longer for an eau de parfum. After being out and about for 6 hours, a very light scent lingered on my wrists. However, the fragrance was more intense on my clothes. Sillage is pretty good, the olfactive molecules seem to be able to travel quite a fair bit of distance. Ultimately, I think Mon Guerlain is beautifully done. However, if you’d normally prefer a light and refreshing fragrance, you might find the sweetness from vanilla a little cloying. I’ve gotten mixed reviews from people I had spoken to, so I’d say see (and smell) it for yourself.

On another note (no pun intended), I was so excited when I read that Angelina Jolie is Guerlain’s new muse, I guess I fell in love with the fragrance partly by association. Views about her might be polarizing especially when her life is constantly exposed in the media. Nonetheless, she’s always been someone I admired. As a child, I looked up to her for a cool moves when she played Lara Croft. Now she remains my favourite celebrity for her humanitarian spirit and adventurous soul. I believe to many, she is as beautiful on the inside as well as on the outside.

Now you can buy the fragrance islandwide at all leading departmental stores.

Guest blogger on the topic of Perfumes - A chemist by day and dreamer by night. But mostly, she's an avid Scent Collector. In her free time, she admires the pretty bottles of perfumes lying around. Often, she finds herself in another world after taking a whiff of the wonderful scents.