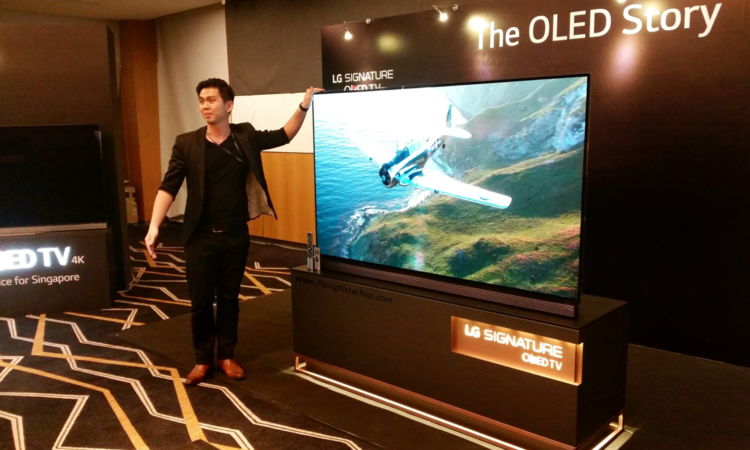 If you’ve seen the TV above in real life, you’re either an antique collector or wise with the years. This was LG’s first TV in Korea, produced in 1966. A simple 19 inch black and white TV, it was the very first domestically produced TV in Korea.

LG has come a long way since then, playing a key role in the development of the TV around the world. The history of LG TV is peppered with many ‘first’s, such has producing the world’s first 55 inch full HD TV, the largest TV screen ever made in 2004. They quickly surpassed that in the same year with a 71 inch FHD plasma display flat panel TV, a feat which showcased their creative and engineering prowess.

Early this year, LG marked their anniversary by releasing a TV panel with an incredible thickness of 4 stacked credit cards – the LG Signature OLED TV. Qi Yun and I were fortunate to be invited to the launch of LG’s superb TV line-up in April 2016.

For me, it was an immersive experience into the world of HDR TVs. Not only was I able to see a dramatic difference in image quality for myself, it was also a good lesson for the nerd within.

Apparently, not all HDR TVs are created equal. There are 2 formats of differing standards – the HDR 10 and Dolby Vision. The tl;dr story is that while Dolby Vision is the superior of the two, LG TVs support both formats, giving viewers enhanced quality all the time. Check out our previous post to see what else we’ve to say about LG’s OLED TV!

LG has achieved much over the past 50 years and is poised to develop even more revolutionary innovations. We’re looking forward to see what exciting updates LG has in store for the world!

To get the specs and more comprehensive details of the LG OLED TV, hop on over to http://www.lg.com/sg/oled-tvs

Opinions and suggestions are truthful and purely my own. This is not a sponsored post.

p/s: Have you seen LG’s Sound360 bluetooth speaker? Qi Yun and I own a pair and we totally love it! Check out our review on the LG 360 here.

Heya guys! I'm Shawn, le hubby of Qi Yun. I'm a no fuss, super practical kinda guy , sometimes to a fault. I like travelling and exploring new stuff. This blog helps to chronicle our journeys, which will come in especially handy when my wife asks something I forget. Check out @flyingpistachios for more amazing pics and youtube.com/c/qiyun if you are looking for reviews and the finer details. Do leave us a comment or two so that we know there are living people visiting the blog :D Cheers!